For the fishing enthusiasts, we have complete facilities for cleaning and storing your catch, plus a crab cooking and cleaning station. Kampers West has on-sight management. A centralized convenience store has ice, pop and candy. We also sell firewood.

Fishing for salmon, sturgeon, or bottom fish will find charter boats in Astoria, Warrenton and Hammond. The experienced charter operators can take care of everything, including fishing licenses.

Lower Columbia River Fishing the Columbia River near Astoria is the most productive salmon fishery in the state, with fish running 10 - 50 pounds. Limits are very common here.

Salmon found in the North Pacific Ocean spawn only once, dying after depositing and fertilizing their eggs. The best-known and most valuable species is the chinook salmon, which is also known as the king salmon, Columbia River salmon, quinnat, chowichee, and takou. Market specimens of this fish average about 9 kg (about 20 lb) in weight, but numerous specimens more than 1.5 m (more than 5 ft) in length and well over 45 kg (more than 100 lb) in weight have been recorded. The chinook salmon migrates farther than any other salmon, often traveling 1600 to 3200 km (1000 to 2000 mi) inland to its spawning ground. Its eggs usually hatch within two months, and the young descend to the sea when 5 to 7.5 cm (2 to 3 in) long. The sockeye, red, or blueblack salmon is another valuable species, as is the coho, or silver salmon, which has light pink flesh. Other salmon in the Pacific basin are commonly known as the pink, or humpbacked salmon, and the chum, or dog salmon.

Anglers fish for salmon with rod and reel, often using flies as bait. Commercial fishing for salmon is done on a much larger scale, employing traps and pound nets to catch the fish on the way to their spawning grounds. Salmon canning is one of the major industries of the American Pacific coast. To mitigate the decimation of wild salmon runs caused by construction of dams and overfishing, the U.S. Fish and Wildlife Service yearly deposits billions of salmon eggs and young, propagated in nurseries, into natural breeding grounds and constructs fish ladders for the upstream journey of mature salmon. However, hatchery-raised salmon have aggressive feeding habits-that is, they spend most of their time at the water's surface looking for food unlike the wild salmon that spend most of their time in deep water or under cover. As a result, hatchery-raised salmon consume most of the food wild salmon need to live. At the same time, this aggressive feeding makes hatchery salmon more vulnerable to predators because they stay near the surface. Hatchery salmon usually have less genetic diversity (see Genetics: Genes in Populations) than wild salmon, which can lead to lowered resistance to disease and other environmental hazards. The annual harvest of wild and farm-raised salmon in the United States averages about 478,000 metric tons, of which about 60 percent is canned. 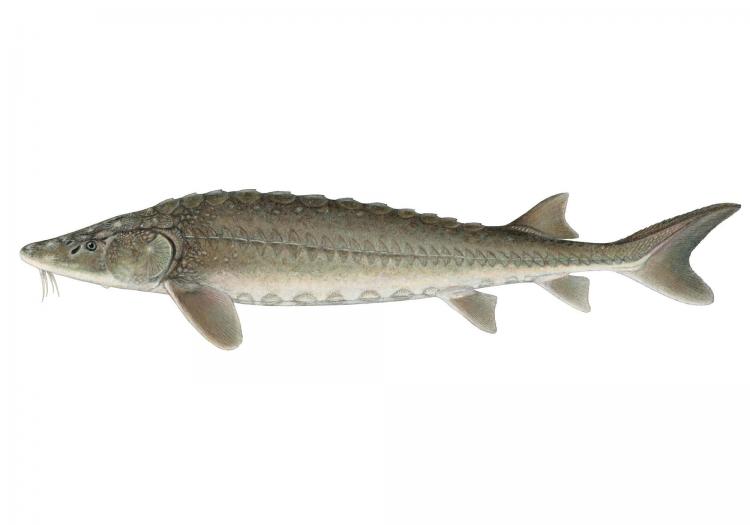 In salt water, sturgeon range from Ensanada, Mexico to the Gulf of Alaska. The larger river systems on the west coast host spawning runs. The Columbia-Williamette, the Sacramento-San Joaquin, and the Umpqua are the most notable. Smaller populations can be found in the Russian, Klamath, Rogue and Coquille systems. Populations with access to the sea may or may not migrate and there are landlocked sturgeon in the Columbia River and Shasta Lake.

Sturgeon can live to be 100 years old and are the largest fresh water fish in North America. The sportfishing record fish was caught in The Dalles, Oregon and weighed 900 pounds. All the west coast states have bracketed length requirements for fish taken. For Oregon and California fish that are 4 to 6 feet in length are allowed to be kept. Check the Regulations!

A female sturgeon takes at least 11 years to mature, males somewhat less. Sturgeon do not spawn every year. Spawning takes place during the spring and the fish prefer rocky or gravel bottoms. Up to 5,000,000 eggs are released into the river followed by the milt. The sticky eggs adhere to the bottom where they hatch within 2 weeks.